My sister woke up to a fully decorated room and a Sweet 16 Birthday Princess Sash and Button awaiting her.  She did not wear the sash all day, to my disappointment since I had picked it out but she wore it at night when we closed Magic Kingdom.  We quickly got ready and got on a bus to Magic Kingdom.  We were let into the parks because we had the tour reservations and signed in to the 8:30 tour.  We received headsets which ended up being very easy to use so that we could hear the tour guide better.  I am not going to tell much about the tour however I will say that it was fantastic! Our tour guide was awesome.  My three favorite parts of the tour were 1) seeing the mad rush of people run down Main Street as the park officially opened for the day 2) seeing the backstage parts of Magic Kingdom and 3) learning facts that I had never read about or heard of as a huge Disney World fan.  Since my sister turned 16, we could finally go on the Keys to the Kingdom tour and it was worth it.  We had lunch during the tour but no dessert so after the tour ended we grabbed Mickey ice cream pops in Tomorrowland.  Here is my overjoyed birthday sister with chocolate on her tooth.

We went on the Tomorrowland Transit Authority PeopleMover, which is my grandma’s all time favorite ride.  She went on it during the 1964-1965 New York World’s Fair which is very cool.  The part where you go through Space Mountain appeared darker than normal or maybe my vision is just getting worse.  We then went to the Monsters Inc Laugh Floor, which has become a new favorite of mine.  The show is different every time and very funny.  You can go three times in a row and still have a blast. Here is a photo of my dad featured on the screen during the show.

I know he will be thrilled when he sees this on my blog.  My sister really wanted to take pictures of the new Festival of Fantasy parade.  So we headed over to Main Street to watch the parade.  My dad bought popcorn and I have never had popcorn at Disney.  It was very good.  The sun was really shining at this time and I could feel my scalp getting burned which would hurt in the shower in the following days.  We decided to leave the park after the parade in order to get ready for my sister’s birthday dinner at Narcoossee’s at the Grand Floridian.  The first time my parents, aunt, and grandma, went here they were so stuffed afterwards and had to sit down on a bench before continuing their night.  The second time, we all ate there and it wasn’t as great of an experience with cold food and less than Disney type service.  So my dad determined that this time would be the deal breaker.  We had an amazing dinner here.  They had shellfish free and dairy free menus for me and my mom and were able to change almost any dish to suit our allergies.  I ordered a cake for my sister when we walked in and she did not notice.  At the end of the meal, my sister and I went to the bathroom and the waitress brought out the cake all lit.  My dad says she quickly blew out the candles and ran back.  We returned from the bathroom and had take 2 of the birthday cake.  My sister was surprised especially since I had sounded very convincing when telling her what I was going to order from the dessert menu.  After dinner, my dad brought my grandma, aunt, and mom back to Old Key West while Emma and I took the monorail to the Magic Kingdom.  Emma and I rode the People Mover another time for fun after watching the fireworks on our way in.  They let people out of the park next to the bathrooms right before Tomorrowland off to the right of Main Street which was weird.  We had Fastpasses for Space Mountain but I have been getting more motion sick than I used to so I decided to pass.  My dad arrived in Magic Kingdom 15 minutes after the Fastpass+ Reservation expired but him and my sister were still allowed on which was great.  We rode Winnie the Pooh since there was no line and then went to Ariel’s Undersea Adventure to use up more Fastpass+ Reservations.  Well we got stuck in the Ursula scene for ten minutes.  So others were taking flash photos and we decided to attempt a selfie.  It turned out blurry but interesting… 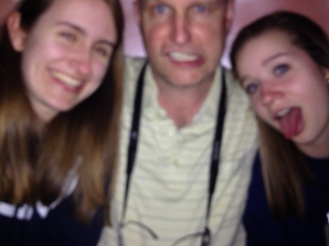