Singing and Dancing in the Rain

Florida is known for its random 20 minute thunderstorms mid-afternoon.  Occasionally, however, thunderstorms appear and last for hours at night.  Your great plans for making it to Magic Kingdom for 3 Extra Magic Hours might have to be altered, but you can create spontaneous memories.  Here is the story of how I fit unplanned singing, dancing, and shopping into one stormy night.

Once upon a time, in the land of Orlando, Florida, my family and I were strolling around Downtown Disney completing some last minute shopping two days before our August trip was supposed to end.

My two friends, my sister, and I were planning to meet my cousin in Magic Kingdom in an hour or so for Extra Magic Late Hours.  We were walking towards the World of Disney when we noticed the dance party on the stage across from the store.  My mom went into the store to shop, but my sister, friends, and I stayed outside to dance.  Very quickly after we had arrived and starting dancing the Cotton Eyed Joe, it started to drizzle.  I shrugged it off and hoped it would pass.  But it didn’t.  The rain started to pick up and my friends went inside.  My sister and I became soaked while singing and dancing along to the Cupid Shuffle but laughed it off because we were in Walt Disney World and having a blast.  My sister’s contacts started to blur so she couldn’t see but she stayed out until the end.  The dance party had to stop because of the rain (which I was very disappointed about because this was the first time I had ever participated in it!)  We went inside the World of Disney store to find the rest of our party and almost froze.  I never noticed how strong the air conditioning was in this store!  I have only been tempted twice to buy a sweatshirt in Walt Disney World in August and this was one of those times (the other would come later on in the night after getting soaked on Splash Mountain).  Here is a selfie from the night where you can see how soaked our hair is! (Who knows why I am still wearing my sunglasses!) 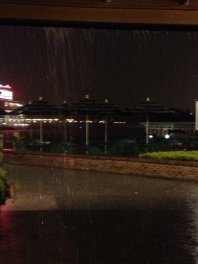 Waiting around for another two hours for the rain to stop while going to connecting stores or non connecting stores during lighter breaks was hard.  I mean who wants to be inside the stores when you could be riding Space Mountain in Magic Kingdom!  I later found out that due to the storm, some of the rides had to shut down because they had lost power for a bit.  We eventually made it to Magic Kingdom and had fun there, but the rain was definitely an interesting, unplanned start to the evening.

Even though I made it to Magic Kingdom MUCH later than planned, I didn’t mind this random rain dancing.  Sure, the rain can damper plans, but it can also create unexpected memories in Walt Disney World and it rarely ruins a whole  day in the Happiest Place on Earth!