Where to…sail on a cruise around the world

I talked about the Disney Cruise Line on Monday, but today I will discuss a different type of cruise.  A couple of other more negative names for this post could be Where to…find a song to get stuck in your head for the rest of the day or Where to…find a headache quickly, but I prefer to be more positive because I greatly enjoy this ride.  Called “the happiest cruise that ever sailed,” It’s a Small World will bring you through different regions and countries of the world without needing a passport. 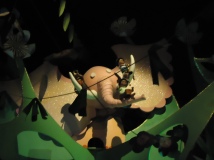 The first version of this attraction was at the New York’s World Fair from 1964 to 1965.  It then went to Disneyland and later on, Walt Disney World opened a version of it in 1971.  It’s a Small World is one of the staple Fantasyland rides, and it is hard to think that Disneyland opened without it because it had not been thought of yet!

This ride is extremely detailed with many dolls, costumes, and scenery along the ride.  I never know in which direction to look when I am on this ride.  Make sure you look up because sometimes some of the coolest sets are right above you!  The Disneyland version of the ride is part outdoors and the boarding area for the Disneyland Paris version is also outdoors.  However, in Walt Disney World the entire ride is inside.

It’s a Small World usually has the shortest waits late at night or first thing in the morning.  Mid-day is the worst time to try to take the cruise because park goers are starting to get tired from walking

and want to go on something that is relaxing.  Please do not take flash photography while on this ride because it is really evident and distracts from the beautiful layout of the ride.  My favorite scene of this ride would have to be the last one where goodbye is said in many languages.  See how many languages you can identify next time you ride!

One of the coolest things to see is when the hour changes, the clock and the dolls in the boarding area come alive.  Try to time it so that you can see the clock’s hourly routine while boarding or while waiting in line.  And lastly, if you come off this ride and still don’t know the lyrics of the song after listening to them for ten minutes, then you might need to ride it a second time!

Filed under Walt Disney World, Where to...