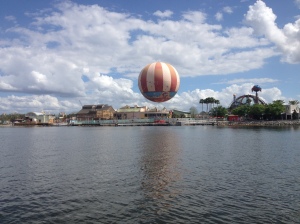 Today we decided to have a relaxing day since the rest of our days were packed full with meals and parks. My dad and I ran around Old Key West, one of the best resorts to run around in my opinion. We ended up sprinting at the end to tell two girls who had missed the bus to not run to the next bus stop but to head to the Hospitality House. It was so nice to be able to run in shorts after having to wear many layers back in the northeast anytime we stepped outside-very liberating to 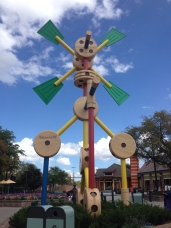 run in Florida.  My dad and I ran our fourth half marathon on Sunday with my aunt, uncle, and cousin so this run was in training for that event.

After the run, we ate at Olivia’s at Old Key West for an amazing breakfast.  I ordered eggs for the first time at a restaurant…always a first for everything!  My mouth is watering thinking about that delicious breakfast.  I had eggs, ham, and a biscuit plus chocolate milk I believe.  Some of my family has a picture in a frame on the wall of Olivia’s and the location had changed so I challenged my family to find the photo.  I had found it when I flew down and had time to spare before the rest of the family arrive.  My mom found the photo first and won a prize which has yet to be determined.

We all decided that we would head to Downtown Disney for the day after breakfast to do some shopping, ice cream eating, and hanging out.  We took the boat from Old Key West there which was very relaxing and a way better idea than driving with all of the construction going on to turn Downtown Disney into Disney Springs. I would suggest

taking the bus or boat or alternate form of transportation to Downtown Disney because parking would probably be a problem.  The boat ride took about 15-20 minutes and dropped us off near Cirque du Soleil. We browsed in the new shops such as the new hat store and the new shoe store after looking in Fit2Run. We kept walking though and ended up in the Marketplace soon enough.  I ended up buying a few items in Downtown Disney after my grandma and I stopped at Ghirardellis for ice cream. The cast member at Ghirardellis recognized us from our last visit which was neat. I always get Mint Chocolate Chip Ice Cream here.  I bought some Little Miss Matched Christmas socks that were on sale as well as some Alice in Wonderland socks that sadly were not on sale.  After shopping around, we took the boat back to the West Side in order to be able to get the boat back to Old Key West.  We wanted to have enough time to get ready for dinner at Narcoossee’s at the Grand Floridian.

We arrived at the Grand Floridian early in order to walk around and look in the stores.  We did not see a wedding here this time unfortunately.  My sister and I enjoy seeing the wedding guests from the weddings that take place at the Grand Floridian Wedding Pavilion.  We took some photos before dinner and then headed inside the restaurant.   My grandma, aunt, dad, and mom had a great experience at Narcoossee’s before I was born.  They could not walk when they left the restaurant because they were so stuffed.  Then a decade later, we had a terrible experience at the restaurant.  Last trip though we had a great dinner and the same continued for this trip.  The Caesar Salad here is very good, as are many items on the menu.  Narcoossee’s does have special menus if you have an allergy so definitely ask for those when you are seated.  Day 5 on the trip we head to Animal Kingdom and have lunch with an Animal Specialist!