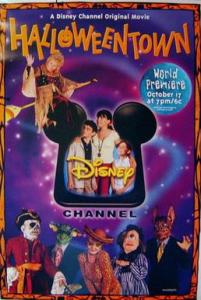 I think it is a bit early for Halloween items and shows.  However, because the Halloweentown movies have come up in discussions twice in 24 hours, I decided to write about them!  Disney Channel released four Halloweentown movies from 1998 to 2006.  The basis of the movies is that Marni lives a normal life until her grandmother from out of town (Halloweentown) comes to visit and Marni discovers she has the special witch abilities.  Marni has an older brother and younger sister who help her on some of her adventures throughout the movies.  Halloweentown is a unique place where skeletons are the taxi drivers and witches and warlocks wander around.  My favorite movie of the series is probably the third one, “Halloweentown High,” where a group of Halloweentown teens come to the US to go to Marni’s high school and it is not the easiest transition.  My least favorite movie of the series is the fourth movie because the original actress who played Marnie (the main character) did not return for the last movie.  I could not tell you what happens in the movie because I never watch the last one!  Disney Channel plays these movies at least twice in the fall, so if you haven’t seen them I would definitely check the Disney Channel schedule online to see when they are playing.  It’s a tradition for my sister and I to watch the movies (except for the fourth).  I also just found out that my neighbor has the series on DVD which is very exciting so I am looking forward to having a movie night with my sister and neighbor when I am home.  I highly recommend this movie series, as it is a favorite of mine.  For those who have seen the series, what is your favorite movie and why?

One response to “Halloweentown Movies”