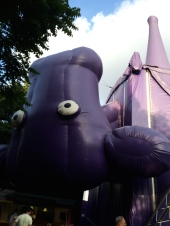 he Udderbelly venue is located on the South Bank of the Thames River in London.  It is a short walk away from the Waterloo and Embankment tube stops.  This is the 7th year of the festival which runs from April through July and brings in a lot of interesting acts ranging from comedians to musical performers to jugglers.  The Udderbelly is basically a huge upside down cow, which is a very interesting idea for a small, summer performance venue.

I can say that I would have NEVER thought of that idea.  But there is an outdoor bar area with lots of drinks as well as bites to eat for purchase.  The crowd outside ranged from a few families to many young adults and then an older crowd as well.  More people were outside the theater enjoying the nice day.  The act that we saw one night was called Circus Geeks-Beta Testing.  They were fantastic!  The show kept us entertained the whole time and the variety of the different acts was great.  I never knew whether the next act would be more playful or more scientific.  Going had been a last minute decision and my dad had found out information online about it.  I am really glad we went as it was a fun thing to do and something different from all of the usual touristy stuff.  The Udderbelly is a small venue but just the right size for performer audience interaction.  For more information, check out the festival website here. And I took a photo of the Utterbelly as we went up in the London Eye which is a short walk away as well so here is a different perspective of the performance venue!