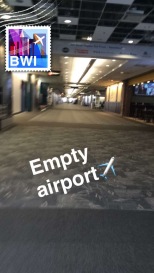 I just came back from a whirlwind but amazing trip to Orlando for school.  I won’t comment on every bit of the trip since that would probably be a terribly long series of posts, however I will post on each park/hotel/restaurant I went to and what I saw.

So early last week (actually very early in the morning around 7am) I headed to the airport and security took less than two minutes!  We flew out of Baltimore (BWI), an airport I had never been to before, but the whole process was very smooth.  There were many Southwest flights taking off but the terminal we were in for our JetBlue flight was empty.  I could’ve cartwheeled down the terminal and not hit anyone.  However, I probably would’ve injured myself since I was not really awake yet.

What is the one thing you really don’t want to forget on a trip?  Especially on a trip where you have to be in communication with others on where to meet and at what time?  It’s a phone charger.  I had left my phone charger at home.  Great.  Well since we had two hours before our flight, I grabbed a delicious double chocolate donut at Dunkin Donuts and bought a phone charger at Brookstone (keep this in mind because the phone charger problem returns at the end of the trip).

We boarded the flight easily and thankfully I had an aisle seat.  I went through my usual

JetBlue flight routine.  First, I sleep for a bit and turn the map screen on my TV and listen to the Pop XM radio JetBlue has on the map channel.  Then, I wake up around snack time and get a pack of Blue Chips and eat them.  After that, I go back to sleep or watch the map until landing.  The flight went by quickly and soon enough I was in Orlando!  Pardon all the snapchat photos for now…I will post regular photos later on.

Well we disembarked, used the bathrooms and then took the shuttle over to the main part of the airport.  My dad always says “In a week we will be doing this again but the other way” and I said that in my head as we went on the tram this trip.  We passed my favorite store, the Disney store, after riding the tram and I knew we were finally in Orlando.  I enjoy seeing all the little kids with their parents and the Mickey stuffed animals or princess bags that they are carrying on the plane.  I don’t know how my parents, grandma, and aunt did it when I was younger and had to carry all that stuff plus car seats and bags.

I hadn’t checked a bag but someone else had so we hung out there for a bit.  Then the driver picked us up and whisked us off to our hotel-The Hard Rock!  At this point we were all very hungry and couldn’t wait to get to the hotel to change and go grab a bite to eat. 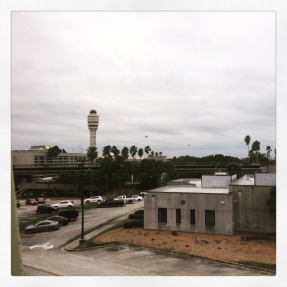 2 responses to “Let’s Go to Orlando!”