I last left off with us riding with our great driver to the Hard Rock Hotel.  I did not realize that Universal was closer than the airport than Disney so that was a nice surprise when it only took us 20 minutes to get to the hotel.  I am going to write a separate post specifically on the Hard Rock Hotel, because it deserves its own review so I’ll just skim through right now.  The lobby has a huge TV screen with constant music videos playing.  It really was not that bad, however later on in the week when we were leaving the hotel at 6:30am, it was a little annoying.

After checking in and settling into our rooms, three of us went off to CityWalk to grab food because we were starving. There is a walking path from the Hard Rock to CityWalk.  We took a wrong turn somehow and ended up at the top of a water slide at the hotel pool.  The lifeguard knew immediately that the three of us in regular clothes did not want to go down the water slide and he joked around with us before telling us how to get to CityWalk.  The next day, our whole group got lost and we burst out laughing when our director asked him for directions as we must’ve seemed to always be getting lost.  We finally made it to CityWalk and had to go through a metal detector and bag check before entering CityWalk.  The first place we saw was the Hard Rock Cafe.

Well since we were staying at the hotel, why not eat at the Cafe too?  We also did not want to walk any further and would have ate anything at that point.  I had a delicious chicken sandwich with lettuce, tomato, and bacon.  The fries were amazing as well.  I almost finished everything.  I had wanted a milkshake too but they were as expensive as some of the alcoholic drinks at $15!  I love milkshakes but I was not about to spend $15 for one.  The Cafe has a huge car in the middle that rotates around and is very spacious inside.  There are two floors and the walls have memorabilia and photos from different singers.  The restaurant, like the hotel, was noisy.  Music playing, televisions on, and we had to speak up to be heard.  But the food was good and we were happy to eat.

After we had satisfied our hunger, we decided to walk around CityWalk and explore for a bit.  We went into a few stores and noticed they had mini golf which would have been fun to do if we had had time.  We had to meet the group again for dinner so we wandered on the path over to the Loews Portofino Bay to see what that hotel looked like.  It was very nice there and we only stopped for a few pictures before heading back to the Hard Rock to get ready for some singing and dinner.  Once back at the hotel, we changed into warmer clothes since we had not realized how chilly Florida was going to be at this time of the year.  We then met the group in the lobby. 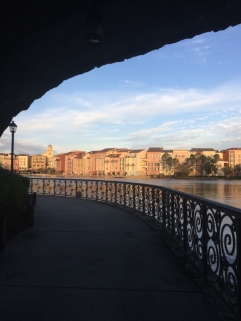 We walked back over to the Portofino to hear two beautiful singers from Italy sing over the balcony to us.  It was chilly though and we were all cold.  We had only packed clothes that would work in 80 degree Florida weather and had light jackets that did not keep the wind away.  We walked back over to CityWalk for dinner at the NBC Sports Center.  This restaurant is huge and from where I was sitting, I could hear music and see 10 TV screens.  Not one or two but 10!  I had a pasta vegetable dish here and we debriefed on the week before heading to sleep.  The next few posts won’t be as chronological but will be more focused on a specific thing I did or saw.  The next post will be on what we did in Epcot!