The days are flying by as it’s already almost Thursday (and I still need to complete my reading for tomorrow!) of the first week of class.  Yesterday, we went to a pub as a class for dinner, where I had Chicken and Leek Pie (basically chicken pot pie).  It was very good and slightly bigger than the portion I had in Orlando a month ago.

I was not able to finish this one even though I was starving! I was not a fan of the mash but the vegetables were actually pretty good and were well cooked.  I am starting to miss having a bucket load of ice in my water though as you barely get two ice cubes here and I enjoy my water ice cold.  I am the American who asks for more ice, especially when it is 75 degrees and there is no AC!

Before we got to the pub, a group of us went to Big Ben and the London Eye to do some exploring after our field trip at the Museum of London.  We walked all around and even passed where my family and I saw a

show last year in the Udderbelly.  Along the river it was very lively with music and street shows going on before the London Eye.  We are going on the Eye as a class at the end of the trip and we did not have much time before dinner so we just walked by it this time.

The Museum of London was just as I had remembered it with a lot on the Great Fire.  It was a little larger though and had a few exhibits such as one on the London Olympic Cauldron that were not there when I last visited in 2008.  We spent a solid two hours there before regrouping.

Today, we had class in the morning as usual and then went to the 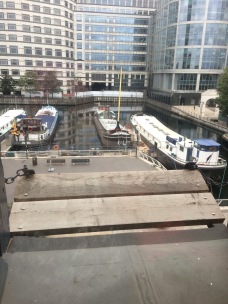 Museum of London Docklands in the afternoon.  The past few days have been sunny and the perfect temperature.  I brought my fleece but did not end up needing to put it on.  It was a neat museum but I am not going into the shipping industry anytime soon.  I stopped to take a photo near an Underground sign in the Museum and felt like I was Vanna White on Wheel of Fortune with how I ended up posing.

After our adventures all around the city, we ended up cooking tacos for dinner.  All three of us had to call our moms to ask questions about cooking the chicken so we laughed about that, but it was a success!  We had some wine with dinner as well before calling it a night.  Now I have to get to my reading for tomorrow, before it gets too late!