Bank of England and A Visit to the Countryside

Thanks everyone for reading about all of my museum visits and following along during my time in London. Enjoy the exciting posts now because once I get to the university in October, I do not think my daily life will be as thrilling!

On Monday we had an afternoon free, as yesterday was an all day field trip and our professor offered to give us some time off before the busy day.  So Monday afternoon, I went to the Bank of England to exchange some old notes.  I also went to the Bank of England Museum.  This Museum was very well done.  I read through (almost) everything in 45 minutes but it was very interactive and made the financial system easy to understand.

I was able to touch a gold bar as well which was neat and they had how much it was currently worth in pounds right above the gold.  I touched gold worth 350,000 GBP!  The museum is free, easy to get to, and was not crowded.  I would definitely recommend visiting this museum.

Yesterday we had our all day visit to Faversham in Kent.  We took an early train out of London Victoria and headed into the countryside.  I slept (as I always do in any sort of vehicle) but kept an alarm because unlike my summer trains into the city and back, I was not getting off at the last stop.  We started off the day a little tired and wondering how this all day trip was going to be.  Surprisingly, I did not look up anything about where we were going ahead of time.

When we arrived in Faversham, we walked to the Fleur de Lis Heritage Centre. 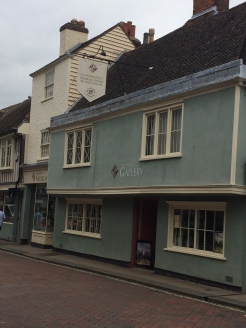 This centre exceeded my expectations.  I thought it would be a small exhibit that we would spend at most an hour at before going to lunch.  However, the Centre took up three older houses and we split into a few groups so that tour guides could lead us through the exhibits.  The centre is very hands on with a record player we could adjust, rotary telephones to call each other on, and air raid helmets we were able to try on.  The items here go back to the spearheads of the ancient times all the way to the World Wars.  The tour guide even sounded an air raid siren for us.  We heard a variety of stories from a woman who murdered her husband on the 7th attempt and dragged him through the snow and was immediately discovered as her footsteps gave her away, to a story on a real life pirate.  Our tour guide was fantastic, as were the rest of the guides for the day. We stayed at the volunteer run museum for two hours before having a lunch break.

I went with a few friends to the Vault, a small pub in Faversham.  I had Shepherd’s Pie as well as some chips.  I had just enough time to run to the second hand bookstore in town before we had to meet back up as a class.  I HAD to purchase the Winnie the Pooh stories in the photo below.  Plus the book was only a pound.  The bookshop was run by volunteers as well and the elderly lady ringing up the book said to me “Oh you’ve found one!” very excitedly and then asked which one and all.  While Amazon is convenient, I really enjoy small bookstores.

Since our class is focused on chemistry and the relationship of this science with the public, we headed to the Chart Gunpowder Mills next.  The walk there was over the river and through the woods.  Okay, not quite, but it was through a few neighborhoods and then by a river which bugs just loved.  I had to put on my sweater in the heat in order to avoid blowing up with mosquito bites.  I was expecting something different, as the Mills were tucked away and it was only one small building.  The guides, similar to the one at the Heritage Centre, knew a LOT about the mills and were very passionate volunteers which was great.  I was in the group that went on a forty five minute walking tour first (so glad I wore my sneakers this day).  We learned more about Faversham and saw old sites from the time of the Gunpowder Mills.  Our professor almost got attacked by a duck when we stopped near a pond as the ducks came up to us easily hoping for food and then flew over us to others who had brought bread.  Along the tour, residents we passed all said “Hiya” or “Cheers” to us so I felt like we were very welcomed even though we took up half of the narrow road at times.

After returning from our walk, we switched with the other group and went inside the Mill.  I know Britain does not get that hot all that often, but I would’ve really appreciated some air conditioning (or a huge ice cream cone) at that point.  It’s been in the 70’s and 80’s here!  We heard more about the actual gunpowder making process with the tools right there in front of us.  Our guide also told us about his recent travels and quizzed us on British currency.

Overall the day was one of my favorites so far as Faversham is the cutest town and I highly recommend it as a day trip out of London!  We were all exhausted at the end of the day and barely scraped together a cooked dinner, but the trip was definitely worth it.