About two weeks ago, my friend and I ran the Walt Disney World Marathon Weekend 5K.  I was also supposed to run the half marathon for my 21st birthday but that’ll be discussed later, as well as the expo.  The 5K was my first 5K (why not run 6 half marathons and then run a 5k?!) and it was so much fun!  I decided to split the morning in half so I can describe the race in more detail.

3:00am: My alarm goes off.  I had been debating whether to shower or not shower before the race and as I woke up exhausted that morning, I decided not to.  So I snooze the alarm.

3:05am: My friend’s alarm goes off and unlike me she gets up and starts getting ready.

3:10am: My friend asks me if I am going to get up and shower because I need to start getting ready.  We laid out our clothes the night before with our bibs pinned so we didn’t have to spend time doing that in the wee hours of the morning.

3:10am-3:45am: I thought I had plenty of time to get ready so I move slow as a slug at first but then start to speed up my pace.  We eat a quick breakfast in the room tip toeing and trying not to wake anyone else up (that didn’t work).

3:50am: We catch the first bus leaving Old Key West to the race.  The bus driver was funny asking us why we woke her up so early just to run a race.  She also reflected on her first Marathon Weekend where she saw marathoners board in their heat sheets and had to say “You got this!” as they tried stepping up into the bus.  We were with a lot of Dopey runners on the bus (if you run the 5K, 10k, half, and full).  There was not any traffic so we arrive at Epcot around 4:05am with two hours to go before the race officially starts and just under three before our corral starts. 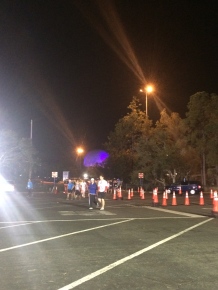 4:20am: After walking to the main area, we had our photos taken in front of the WDW Marathon Weekend banner sign and then waited in line to get a photo with Pluto (who was the mascot for the 5K).

4:45am: The photo line for Pluto moved fairly quickly even with his quick break to get some treats.  Seeing other people’s costumes is one of the best parts of the runDisney races.  We saw a whole family dressed as the cast from Beauty and the Beast, a very convincing Captain Hook, and even two Tooth Fairies who sprinkled some fairy dust on my friend.  We joined the pump up party which is always a blast.  The announcers are very energetic even as the rest of us were still waking up.  We did the YMCA and other people were full out dancing.

5:05am: My friend and I decided it would be a good time to use the porta potties since the corrals would open at 5:30am and we guessed there might be a long line right before then.  We did not have to wait at all to use them so then we stretched for a bit and talked, anxious to get in the corrals and get going.

5:38am: Finally the corrals opened after what seemed like forever.  Thankfully, the weather was perfect so we were not cold waiting around but it had already been 2 and a half hours since we had woken up!  My friend was in Corral E so I moved back to E so that we could run together.  Part 2 will discuss the corral waiting game, eavesdropping, and the actual race!